Projects are identified through the Office of Councillor Wong-Tam. They will initiate a sequence of activities (i.e. submitting ideas, filling out a survey, discussing them in face-to-face or virtual meetings, and prioritizing them) with the objective of making decisions supported by the community.

Projects include participatory components such as ideation/proposals (residents submit and vote on each others ideas), participatory budgeting (proposals are assigned a dollar value and voted on within the budget available), as well as meetings/events.

Councillor Wong-Tam, City Staff, and the Toronto Region Conservation Authority are now reviewing the feedback collected. Next steps will be announced shortly. Check here for updates.

This project is part of Dog Off-Leash Area Revitalization

Corktown was identified and submitted by Councillor Wong-Tam and City staff as the top priority in Ward 13 because of the displacement of the OLA that happened in 2018 when Enbridge construction began.

An off-leash area was previously located in the neighbourhood at Corktown Commons and was removed by Enbridge when major work was undertaken in the area. Enbridge is funding the replacement of the dog off-leash area.

A dedicated dog off-leash area is needed in the community because:

Members of the community have expressed several concerns about the previous Corktown OLA including: the unsuitable location, small size, lack of shade and seating, and the overall design and accessibility.

Over the past year, Councillor Wong-Tam worked with City staff and local community stakeholders to identify a new suitable location. Several locations were considered including various places within Corktown Commons, Underpass Park, and Lawren Harris Square.

Lawren Harris Square is the proposed site for the new dog off-leash area because: 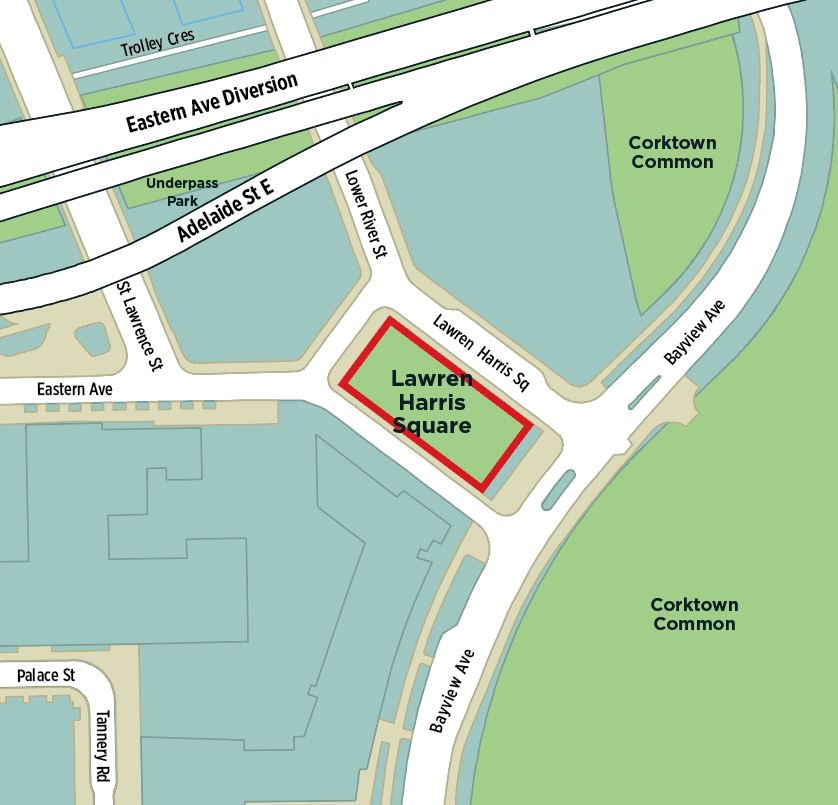 Corktown Commons, the east side of the berm:

Underpass Park West on the west side of St. Lawrence Street:

by Michael Van Valkenburgh and Associates

by Michael Van Valkenburgh and Associates

Don Mac
I propose that Lawren Harris Square be renamed. As Harris was one of Canada’s most accomplished ...
View proposal Name Change for Harris Square
Recommendations for the OLA

Sarah
I am proposing the ground cover for this park be “wood chips” instead of pea gravel or grass. A...
View proposal Recommendations for the OLA
Rename Sumach-Shuter Park for Tomson Highway, Indigenous writer, composer, pianist Canadian icon MacLeans.lived on Shuter St.1980's.

As part of the development at 25 Wellesley Street West and the community benefits agreement, Council...

Allan Gardens Dog Off-Leash Area (OLA) has been identified as a priority by Councillor Wong-Tam base...

Please paste this code in your page: